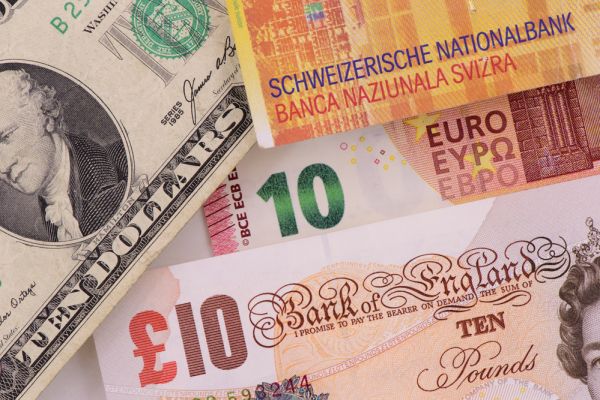 EUR CHF exchange rates went down on Thursday and Friday after progress in China-US trade war triggered higher USD price. For the first time in 16 months there are signs of ending the war after both superpowers had agreed to scrap some tariffs.

The euro exchange rate against the US dollar went down by 0.2% both on Thursday and Friday, to 1.1048 dollars and 1.1038 dollars respectively. These are three-weeks low results – last time the common currency was on such level was on Oct. 15. As analysts put it the market attitude is now negative toward the euro. Until there is no confirmation from the US administration that some tariffs will be implemented back again, the EUR exchange rate will be hurt by a risk sentiment that is shared by investors worldwide.

As appeared prospects of putting an end to the China-US trade war, safe haven assets suffer losses in exchange rates against US dollar. The USD went up 0.3% against the yen to 109.33 yen on Thursday afternoon, whereas in the morning it touched the level of 109.48 yen – the highest in five months. Also, against the Swiss franc USD went up on Thursday – by 0.3% to 0.9956 franc, which means three-week high.

The currency on the other side of the conflict – Chinese offshore yuan, obviously also got supported by news of cancelling some of tariffs. The yuan was traded on Thursday at 6.9834 per dollar, which is a level close to high of three months and was on the course for its sixth straight weekly gain. Australian, Canadian and New Zeeland dollars are considered proxies for risk, and thus they all gained as appetite for risk went up after many weaker weeks. The AUD was up by 0.3% against the US dollar.  Generally, against the basket of major currencies the dollar was up by 0.2% to 98.128 points.

China and USA so far only agree to cancel some tariffs if the initial phase of trade deal is completed. So still there is a long way to peace, but even such small progress has boosted markets. Trade talks means there is supportive attitude for the US dollar and also risky assets, equities. Huge risk for market resulting from escalation of the US and China trade war is removed, and thus investors seem eager to put money on risky and more beneficial assets again. But some does of skepticism remains, as it is not certain yet if the trade talks continue to be successful, and thus if some tariffs indeed are to be scrapped.

In times of high uncertainty on geopolitical scene, investors were buying houses or safe haven assets in order to store value. Now when talks are underway between two superpowers, the mode risk is turned on – investors turn to buying US dollars, and decide not to buy euros or Swiss francs, which means the US economy will benefit. In last few days the trend to sell Swiss francs or yens was observed as money is being moved to assets with higher yield. However, analysts claim such mood won’t last forever, and the optimism for USD shall eventually fade – its exchange rate should weaken in next year. Unless there is some very good global data that could support USD further on.