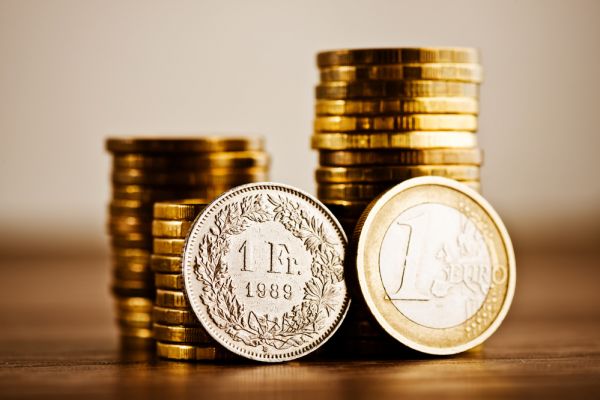 EUR/CHF Exchange Rate Back to 1.04 After SNB Kept Its Policy Unchanged

EUR/CHF is back to 1.04 exchange rate, after some turbulent days with one of lowest rates in years.

Recently EUR/CHF has had some troubled days, with exchange rate hitting lowest points in years. It went far below 1.05, trying even 1.03 level. Now it returned to 1.04 level. Last week investors were focused on the Swiss National Bank’s meeting which didn’t offer much change to its policy, rather just small changes to inflation forecast and a bit higher economic growth outlook – now expected to hit 3.5% for 2021 versus 3% expected before.

The SNB has kept interest rates unchanged at record low level of minus 0.75%. In its statement after the policy meeting, the bank wrote that by keeping rates unchanged it is "ensuring price stability and supporting the Swiss economy in its recovery from the impact of the coronavirus pandemic". Additionally, it once again stated that CHF is highly valued – last time it used such wording was in 2017. Since that time the Swiss franc has appreciated 10% versus the euro. The pair EUR/CHF recently hit the lowest level since July 2015. CHF is considered widely as safe-haven asset, and investors are eager to buy Swiss francs in times of trouble like the COVID-19 pandemic. Additionally, the bank reported again its is willing to make more interventions on the foreign exchange rate market when necessary to take off upward pressure from the CHF. In 2020 the SNB bought foreign currencies for almost CHF110 billion ($119 billion) to stop the currency from getting overvalued.

The bank also has revised slightly its short and medium-term conditional inflation forecast: to 0.6% in 2021, 1% in 2022 and 0.6% in 2023 as compared to previous outlook from September of 0.5%, 0.7% and 0.6% respectively. Commenting on the inflation, the president of the SNB, Thomas Jordan said that “[SNB] was able to prevent a stronger rise in inflation in Switzerland by allowing some nominal appreciation ”, while adding that too strong CHF exchange rate could harm economic growth and even lead to deflation under certain conditions. This might suggest that the SNB is ready to accept some stronger level of CHF without making interventions. Jordan also added that it  was difficult to interpret exchange rate because of different levels of inflation. In US and the euro zone inflation is going up sharply, while in Switzerland its stays at moderate 1.5% level. Jordan believes that the acceleration of prices "will soon reach its peak and will decline over the next year".