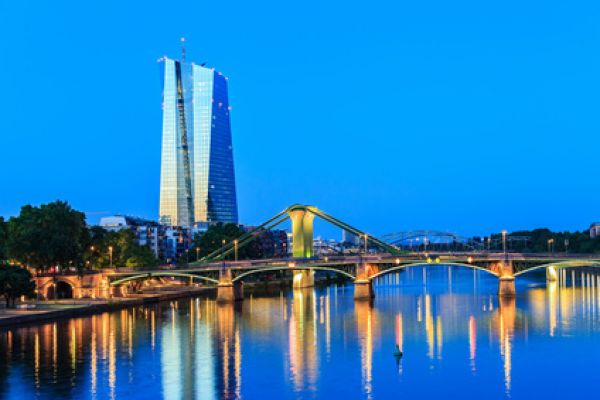 The European Central Bank announced on Thursday 24th that it kept its policy unchanged in a move that was considered dovish by experts. A rate hike is still probable later this year, even though the eurozone economy is experiencing a slowdown. The Euro exchange rate fell down upon the news as the US Dollar gained.

On Thursday the European Central Bank announced on a press conference – with the words of Mario Draghi its President – that its policy remains unchanged. The move was expected by experts, but still considered a dovish one due to slowdown of the Eurozone economy. The interest rates hike is still on the table and might happen later this year, even though with current economic situation in the common area actually an easing of policy would be more accurate than tightening it. The outlook on the Euro area growth has been moved to the downside due to risks and uncertainties of political and economic nature. This does not surprise experts but will have – and already have – influence on the Euro exchange rate. Last month the ECB ended its bond purchase program worth 2.6 trillion euro, simultaneously maintaining its guidance of rising interest rates at some point in 2019.

Slowdown in the Eurozone

The Eurozone economic is worst in five years with weaker growth than expected a few weeks ago.  The fourth quarter of 2018 data showed that Germany, France and Italy have barely reported any growth. The situation is the more serious, as these are the biggest Eurozone economies. Draghi admitted that the slowdown might last longer that was previously though. A dip in the economy growth of the common currency area was supposed to last just a few months. But at this point it looks like it is going nowhere with manufacturing contracted at the end of 208, sentiment indicators and export growth all falling down and being close to record in a few year time lows. What is more, the underlying inflation failed to grow as predicted. Employment growth is also slowing down. The most worrying issue is the export growth which will have it hard to recover due to China’s struggles.

What are ECB options?

If the sluggish Eurozone economy is still observed, the ECB will feel pressure from market analysts to keep record low rates for longer than predicted. Resigning from interest hike might provide some much-needed stimulation for the economy in the Eurozone. The other option the ECB has is offering long terms loan to banks with very attractive terms. It might also change its mind on how long it shall pump into the market cash obtained from maturing of bonds. Policymakers can sit down and wait before undertaking any specific moves in hope that the economy will bounce back. In such scenario, the interest rates hike will be shifted to mid-2020, if data from Eurozone continues to be so disappointing.

After the ECB press conference on Thursday the Euro exchange rate fell down by 0.7 percent against the US dollar and hit $1.13. At some point of the day it was even at $1.129, the weakest rate since Dec. 14, 2018. When Draghi provided cross out for now a deployment of long-term refinancing operation funding (LTRO), the Euro catch a bit more ground and stabilize. However, soon came another blow, when the US Commerce Secretary Wilbur Ross stated a deal between US and China is far away. The Euro Exchange rate fell not only because of the EZB policy, but also the ongoing Brexit turmoil and trade tensions with China had influence on the low eur exchange rate. At the same time, the US Dollar has reasons to grow stronger, as data showed number of Americans filing for unemployment fell to more than 49-year low in 2018. The dollar index was up 0.47 percent at 96.579. Meanwhile the Pound was 0.12 percent down against the US Dollar as the UK awaits key Brexit Parliament debate next week.

To check the current Euro Swiss Franc exchange rate please consult our homepage. With the currency converter you can always compare Euro exchange rate between banks and ExchangeMarket.ch.