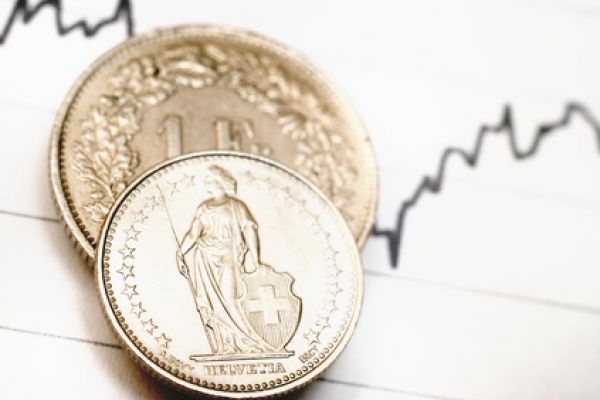 Investors remained optimistic for the second week in a row as safe haven currencies fell down – Swiss franc’s and Japanese yen’s exchange rates against the US dollar were lower. CHF hit the tow-week lowest point against USD. Market awaits FED’ symposium.

Investors are hanging on to more risk sentiment after they turned away from safe haven assets two weeks ago. Last week saw many investors being uncertain if central banks of Switzerland, Japan, European Union or the US would decide to take some measures to help economies, but on Monday they were optimists. This optimism made them feel more eager to take risk, so many of them would rather sell Swiss francs than buy them. As a result, CHF exchange rate went down to two-week low against the US dollar. USD increased by 0.2% to 0.9801 francs. Additionally, sight deposits at the Swiss National Bank recorded another weekly rise. That could be a sign that intervention on the market has been conducted by the Swiss main bank. Similar to CHF, also JPY – another most famous safe haven currency – fell down. The US dollar climbed by 0.1% to 106.51 yen. The Japanese yen recorded lower rates against the US dollar for the third consecutive week. This significantly helped pushing up the USD index measuring its exchange rate against six others major currencies. On Monday index rose to 98.239 points. Meanwhile the one currency that stood its ground against the US dollar was the euro – the common currency rose to 1.1101 dollars, recovering from 1% fall of last week, which was its biggest drop in more than a month.

Investors are optimistic as they await the US Federal Reserve’s symposium in Wyoming at the end of this week, during which policymakers will discuss about measures to be taken soon – among them possible cut of interest rates. There is common belief that during the speech of FED’s chief Jerome Powell there will be made an indication that during the September meeting rates will be cut by FED by at least 25 basis points. It will mean quantitative tightening is coming to the end. Analysts highly price chances for cut of rates by 67 basis points totally by the end of the year.

To make investors even more hungry for risk and optimistic, China disclosed its interest rate reforms that would mean lower costs for corporate loans. In Europe meanwhile, the government in Germany looks to be on the way to scrap its balanced budget rule regarding taking new debt, undertaking stimulus actions.

Not Much to Come This Week

As this week not much is predicted to happen up until the FED’s symposium In Wyoming, the risk sentiment is here to stay. Unless some unpredicted actions – for instance the US President Donald Trump’s tweets on trade war, economy or currencies – make the market unsteady and investors will decide to buy Swiss francs again, there isn’t expected much movement on the currencies exchange rates.